About us José Miguel Potthoff Pugin

He studied “Visual Communication Design” to understand the world in other ways than just the purely vertical of climbing. Growing as a mountaineer at the “Federacion de Andinismo de Chile (FEACH)” and his mountain club in Osorno: “Amun Newen”, while climbing in the Chilean Lakes District and the Maipo valley. In 2004-2005 he participated in the “Mountaineering & Climbing Technification Program” of the “FEACH”, and also accomplished other training courses, as: “Multi-pitch climbing” at the Spanish High Mountain School (EEAM – 2008); “Wilderness First Responder” (WFR – Ecomed 2010 / RE-WFR ECSI 2012 / WFR ASHI 2015 / RE-WFR ASHI 2018); “Leave no Trace” (LNT – 2011) with Nols. As well, he is a member of the Austrian Alpine Club; a specialized mountaineering tourist guide registered in the national tourist service (Sernatur); and a member of the National Association of Mountain Guides (www.angm.cl).

JM has made several expeditions and climbing focused travels in northern, central, and southern Chile and Argentina, the Alps, the Pyrenees, the Dolomites, and the Caucasus Mountains. Additionally, he has led many multi-pitch ice and rock routes throughout the world. Among his high mountain ascents & alpine climbing are Aiguille du Midi, Dr. Hernan Cruz, the gutter Buracchio-Delgado in the Cerro Punta Negra, several volcanoes in Chile: Puntiagudo, Osorno, Calbuco, Puyehue, Casa Blanca. San Pablo and San Jose in Northern Chile, Cerro Arenas, Zmutt Ridge on the Matterhorn, Mont Blanc, and an attempt in June 2009 – with Sandra – of Mt. Elbrus in Russia.

He is well known for his experience guiding in southern Chile, with more than a hundred summits guiding clients on the Osorno Volcano. 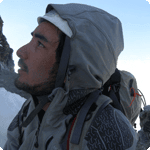 We use cookies on our website because some of the resources that we use in its development incorporate them. By clicking "Accept all", you agree to the use of ALL cookies. However, you can visit "Cookie Settings" to provide controlled consent.
Cookie SettingsAccept All
Manage consent

This website uses cookies to improve your experience while you navigate through the website. Out of these, the cookies that are categorized as necessary are stored on your browser as they are essential for the working of basic functionalities of the website. We also use third-party cookies that help us analyze and understand how you use this website. These cookies will be stored in your browser only with your consent. You also have the option to opt-out of these cookies. But opting out of some of these cookies may affect your browsing experience.
Necessary Always Enabled
Necessary cookies are absolutely essential for the website to function properly. These cookies ensure basic functionalities and security features of the website, anonymously.
Functional
Functional cookies help to perform certain functionalities like sharing the content of the website on social media platforms, collect feedbacks, and other third-party features.
Performance
Performance cookies are used to understand and analyze the key performance indexes of the website which helps in delivering a better user experience for the visitors.
Analytics
Analytical cookies are used to understand how visitors interact with the website. These cookies help provide information on metrics the number of visitors, bounce rate, traffic source, etc.
Advertisement
Advertisement cookies are used to provide visitors with relevant ads and marketing campaigns. These cookies track visitors across websites and collect information to provide customized ads.
Others
Other uncategorized cookies are those that are being analyzed and have not been classified into a category as yet.
SAVE & ACCEPT